Here's my favorite quote about politics:

"I think of voting as a chess move, not a valentine." -- Rebecca Solnit

Once you let go of falling in love with politicians, and think instead of who is strategically most likely to succeed in making your values and goals a reality, life gets so much simpler. You aren't so shocked when politicians compromise, or when they are arrogant or timid or fallible. It takes a certain weird kind of ego to run for office in the first place. A healthy skepticism and an attitude of "what are you likely to do for the issues I care about" is called for.

In love, I recommend giving your whole heart, even if it might be broken. In politics, I don't.

Every once in awhile, though, you come upon a politician who seems to be doing it mostly for the right reasons, to genuinely care about people and want to help. It's rare, but I've seen a few. And I think Beto O'Rourke is one of them. I'm not in love with Beto. I'm not calling myself a "Beto Girl" or a "Betocrat." But I believe the guy is sincere, and I'm impressed with his instincts, and I respect his determination to keep trying to achieve what he's trying to achieve, which is an electorate the truly represents the complicated, diverse state of Texas.

It's not hard to discern that I'm a Democrat. But I take pride in my ability to debate respectfully with friends of various political persuasions, from much farther to the Left than me to way over on the Right. My most fundamental political philosophy is that a government that represents all members of the community is fairer, stronger and more resilient. And we've got a long way to go to get there.

So come with me, if you will, back to August 2018. I'm in Austin working on my album Let's Be Brave, a record about loss and division and hope. The Family Separation policy has recently come to light, and I've organized a vigil called Every Child Returned.

In the spirit of the Mothers of the Disappeared in Central America, we sit front of facilities housing children who have been taken from their families at the border. It's an informative and symbolic gesture. The point is "we know this is going on. It's going on right here. We feel it's horribly wrong."

We make a point of always having a sign that indicates that it's the policy, not the people at any of the facilities struggling to implement it, that we are criticizing. (That said, some are bucolic and some are horrible but it doesn't matter how nice a facility is when you're three years old and have been taken away from your mom.)

It catches on. People follow suit in San Diego and up in Portland and in New York. It makes the national news.

So here in Austin, I have the weekend off from recording, and I ask some friends from Ojai who now live there if they want to come with me and protest at one of the facilities. There are a lot of them in Texas. 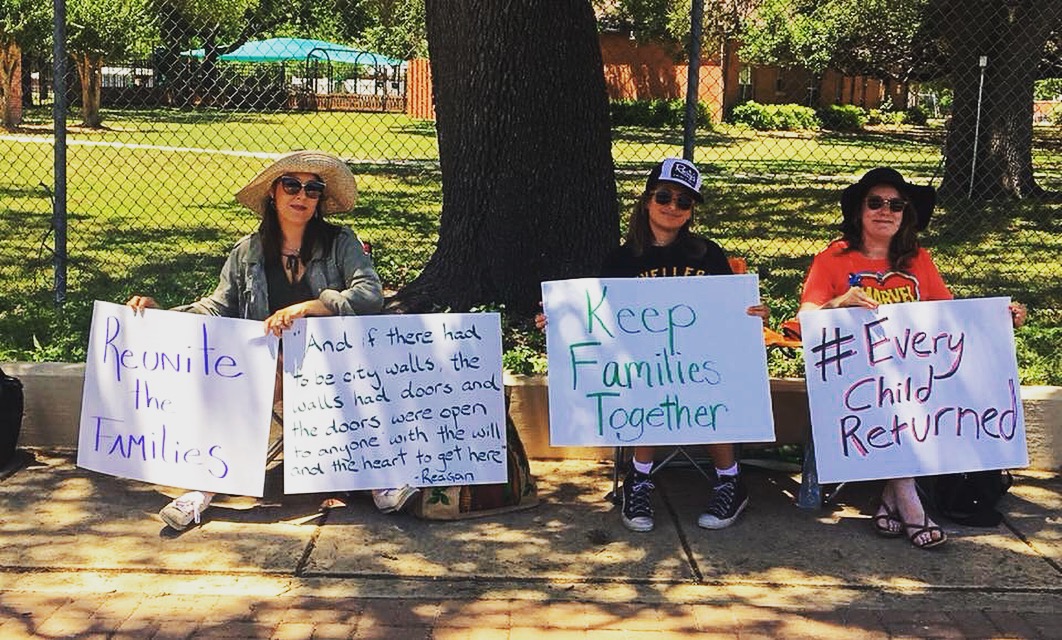 It turns out that Beto O’Rourke is having a rally for his Senate campaign in San Antonio that evening. So we decide to make a day of it and find a facility in San Antonio for our vigil.

Everyone says the Beto people are responsive, so we reach out to see if we can talk them into a photo op with us on his route between campaign stops. It's a no go but his team is quick to get back to us, friendly, and encouraging.

The enthusiasm for Beto across Texas is palpable. Something's going on. Part of it is that he is an engaging guy, with hints of a young Kennedy, and people are responding to that. But part of it – I would argue the largest part – is that he's doing something that hasn't been done in Texas in a long long time. He's listening to people.

When we get to the San Antonio rally in a community park, it is a full on Texas party with a Mariachi band and barbecue. There's a booth where they are hand-screenprinting posters. It feels like a festival. 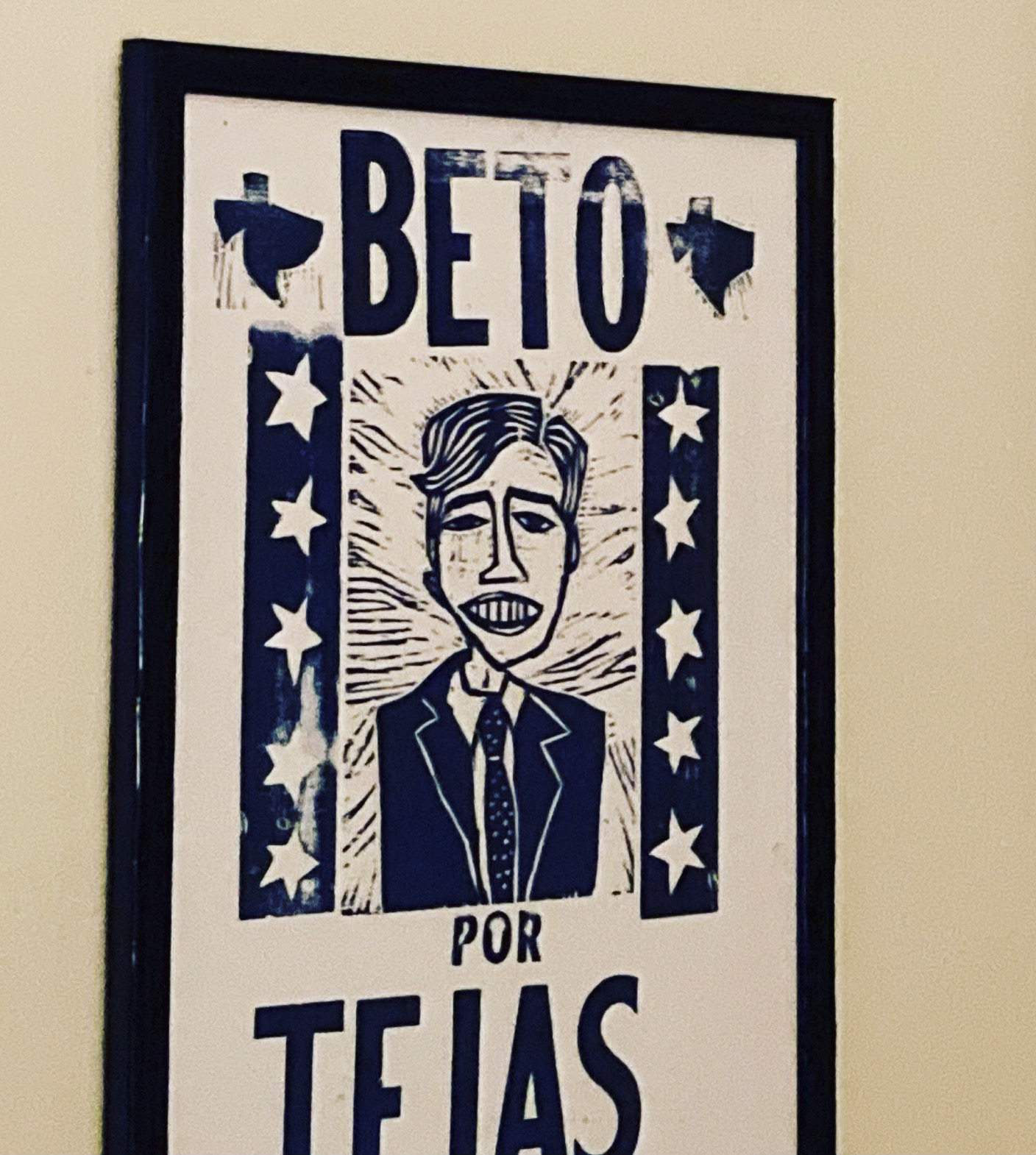 When he launched his campaign in 2017, nobody had any idea who this young congressman from El Paso was.

Both parties had long ago written off the voters of Texas. Texas has long had some the lowest voter turnout in the country. Republicans figured it was a lock, and Democrats figured there was no chance. Beto's pitch was that "Texas is not a red state; it's a non-voting state." His strategy was to travel to big cities and tiny towns across Texas, listen to people and earnestly ask them for their vote, while getting his funny name out there.

(And a note on that: my husband, a white boy who grew up in a majority Hispanic town, is called "Memo" by some Mexican-American friends. It means "Billy," just the same way that Beto from El Paso means Bobby. Not weird at all if you know anything about multicultural communities.)

Beto figured a way of talking to folks of various philosophical backgrounds with a strong sense of his own values, but with respect for people with whom he might disagree about policy. One example is this video that went around, where he is asked about athletes kneeling for the National Anthem. 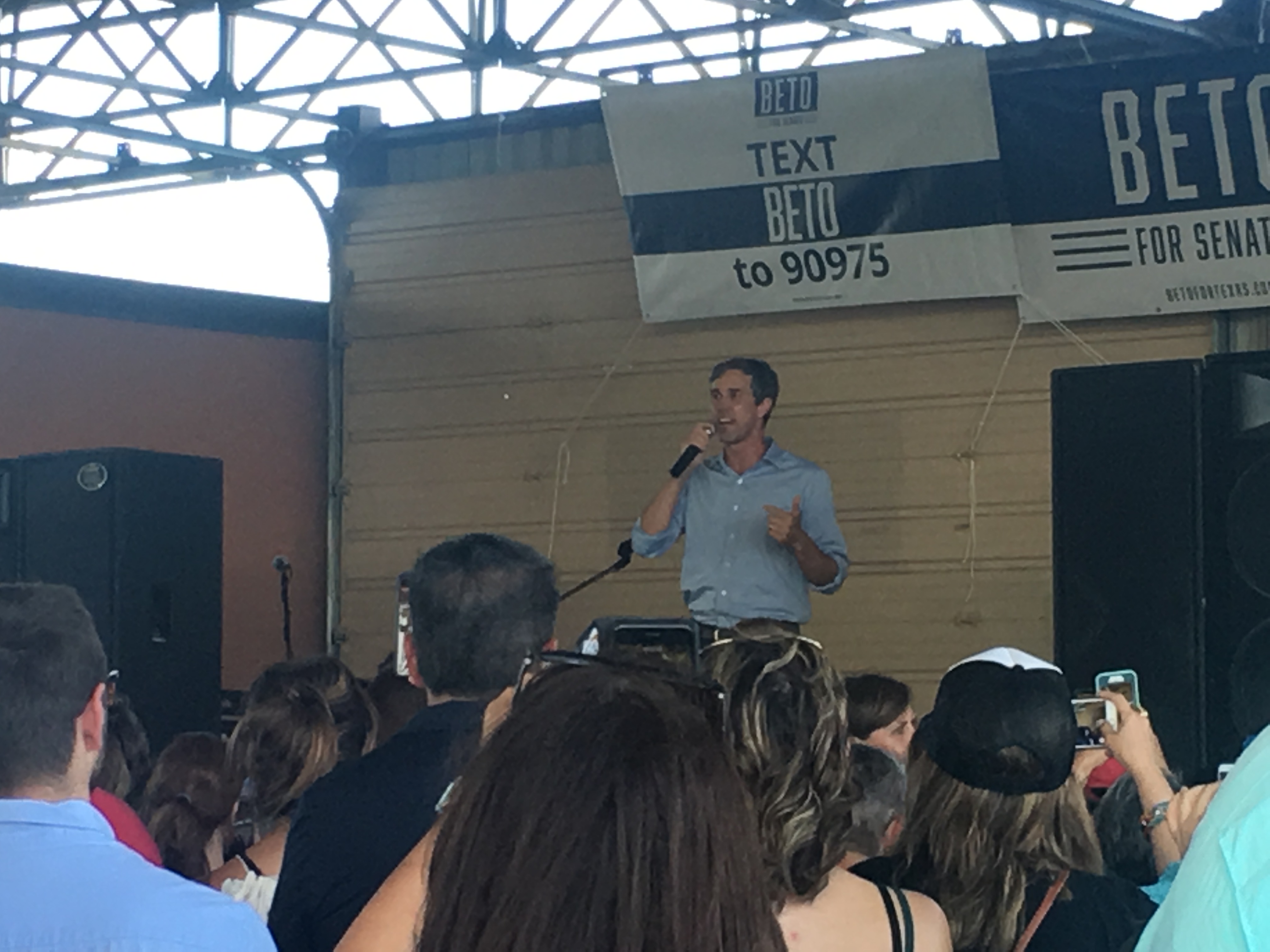 So here I am in San Antonio at this rally, and Beto jumps up on the stage in this community park, and he gives a heartfelt, smart, and motivating speech about his vision for Texas. Some of it is standard politician rhetoric: "Who can we be? What can we accomplish together?" But the new part is: "How can we engage Texans who have never voted before?"

A dude with dreadlocks and a clipboard comes up and asks me if I want to volunteer. I tell him I'm from out of state and he doesn't miss a beat. "Want to send text messages?" "Sure," I reply.

There starts to be some hubbub in the back. Some protesters are heckling. Beto points at them and says, "Hold up. I'm going to give you the microphone in a minute, but I want you to let me finish my speech." At the end, he puts these guys on the spot, hands them the mic, and asks them about their concerns, which he answers in a respectful and measured way. It's something I've never seen.

So I join the texting team. And then I join the call team, and a half dozen of my California friends get together for regular phone banking sessions to make calls into Texas. And then I get an email asking if I want to join the Out of State Team and travel to Texas for the midterms. Yes, I do want to.

So I fly to Houston and I spend the week before the midterms as one of the managers of a field office. I knock on 400+ doors. I talk to a lot -- a lot -- of people who have never had anyone ask their political opinion before. My door knocking partner and I drive some dude to a polling station to early vote, and then drive him home when he's done. I drop off yard signs to a guy who yanks them out of my hand and shoves them into his lawn. He's been surprised and delighted to learn from his neighbors' signs that he's not the only Democrat in his neighborhood and he can't wait to join the club. 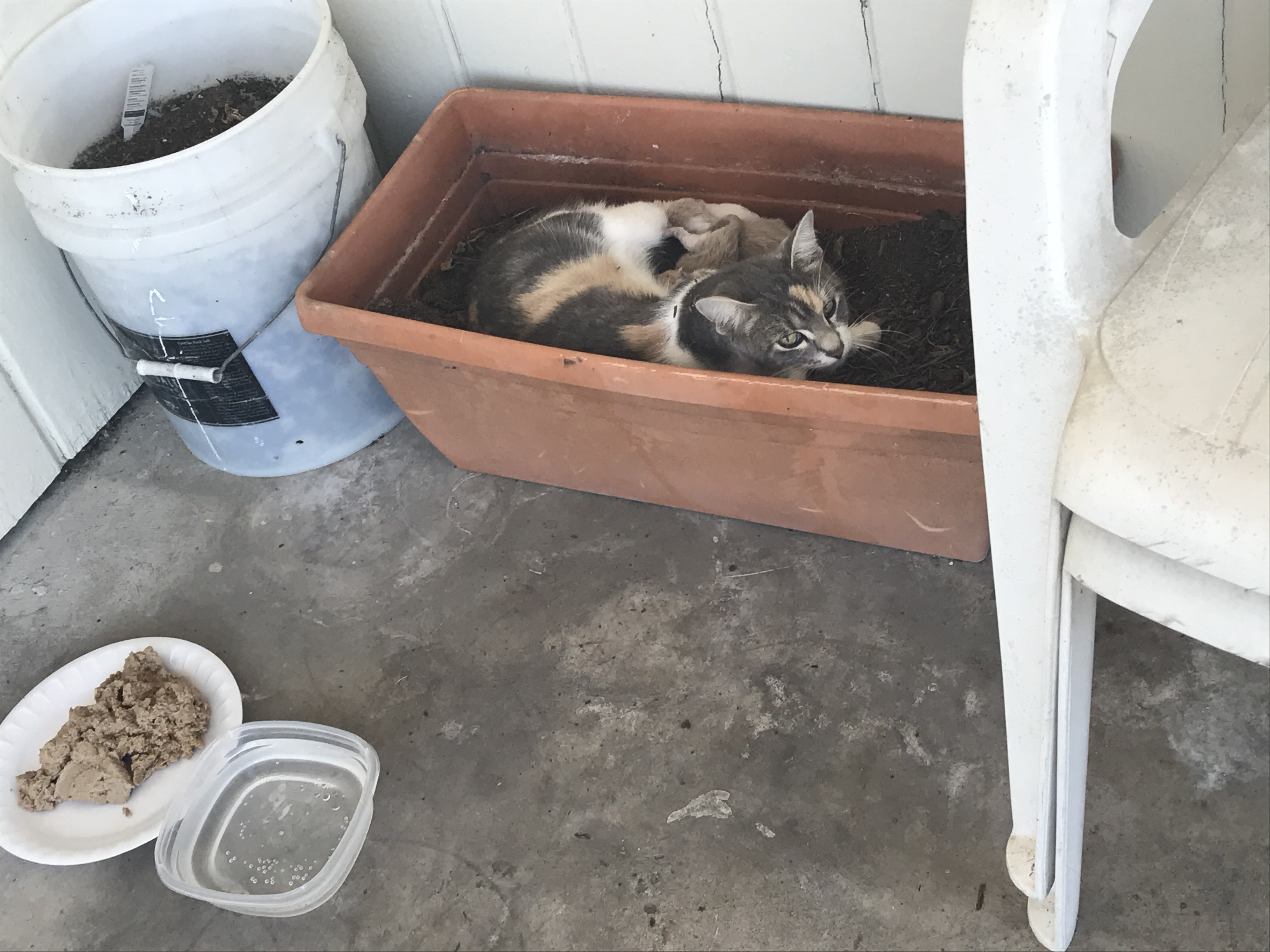 The Saturday evening before Election Day, the early voting centers are closed and I find myself with a small group at the house of a local attorney who has opened up his home since summer as the campaign's first Houston field office. There's a team call that night and Beto's going to give his final rah rah speech to the volunteers.

We make dinner together and I listen as this band of hard bitten itinerant campaign volunteers tell war stories of campaigns of the past and how they found themselves gravitating to this one. One woman has been knocking doors since Bobby Kennedy. They all get that look when they talk about Beto: he's got it, there's something about him. They've fallen in love. And it's the closest I've ever come, so I'll just call it a hearty political crush. The guy is great.

I fly home. Election night is, as they always are, so stressful. 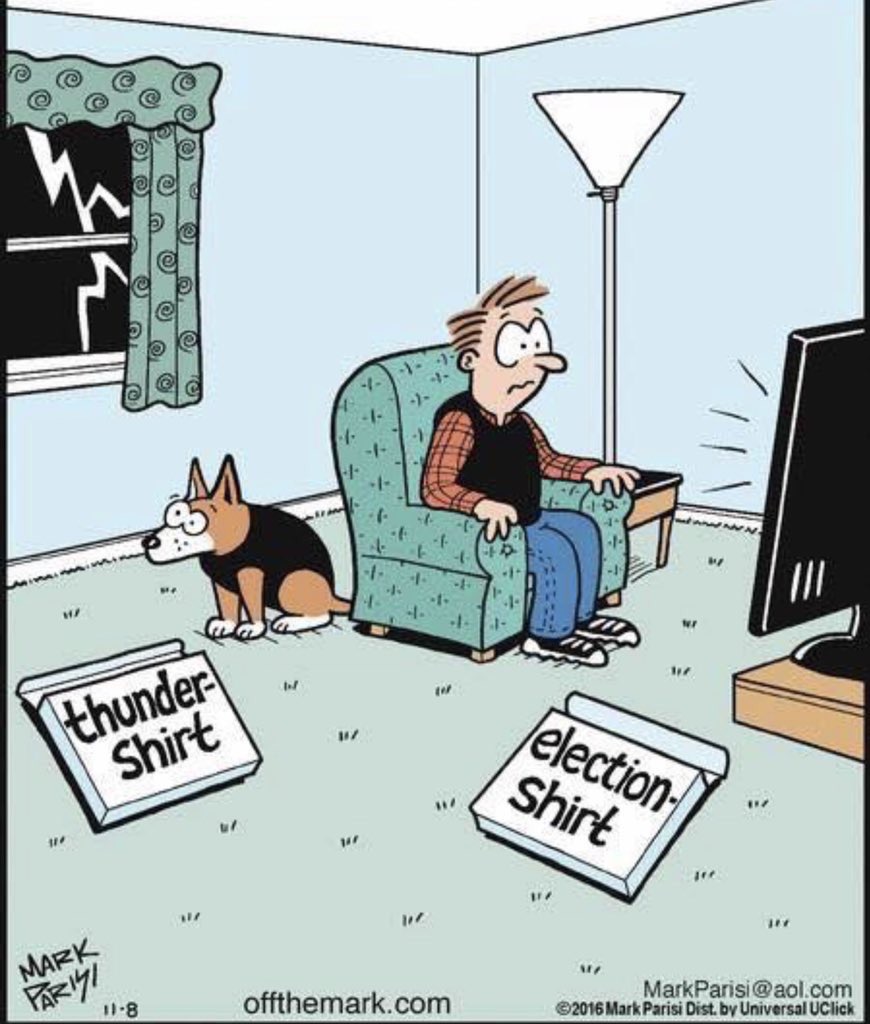 For a minute it looks like Beto might actually pull it off. And of course, it's a total bummer that he doesn't quite get there. But very quickly I also see what he achieved, besides coming from nowhere to get within striking distance of one of the most powerful members of the Senate.

We should be celebrating this. These stories should fill our nightly news shows -- of enfranchised people, of newly minted volunteers, of dogged campaign workers, of people standing in line for hours to vote.

For what it's worth, I didn't think Beto should have run for President. Maybe he got caught up in the hoopla. Maybe he thought in the era of Trump, he had as good a shot as anyone. Maybe it was a calculation to get his name in the national spotlight. But I will say that the fact that Donald Trump kept making fun of him was proof that he'd arrived and was getting under the skin.

A parade of horrors has unfolded in Texas, from the preventable power failure that killed over two hundred Texans to the travesty that is the abortion bill to insane gun laws to a string of anti-voting rights legislation. When the freeze happened, it was no surprise that Powered x People, Beto's organization, jumped in to conduct wellness checks and deliver water and food to stranded Texans. It was amusing to see him criticized for "capitalizing" on helping people. "Try it," I tweeted at Greg Abbott. Couldn't help myself.

I signed up to be an Out of State Ambassador for Powered x People. From California I've been helping the graphics team coordinate with Captains in the 36 Congressional districts and supporting the Drive to You campaign, where you can call or text and a certified registrar will come to you and help you register to vote. Every week on the zoom, dogged volunteers report in about their work at college campuses and farmer's markets and football games. Sometimes Beto joins the zoom. It feels good to be a cog in the wheel.

It's probably no surprise that I am delighted that Beto is running for Governor. Texas deserves so much more than what they're getting. Beto for Texas.