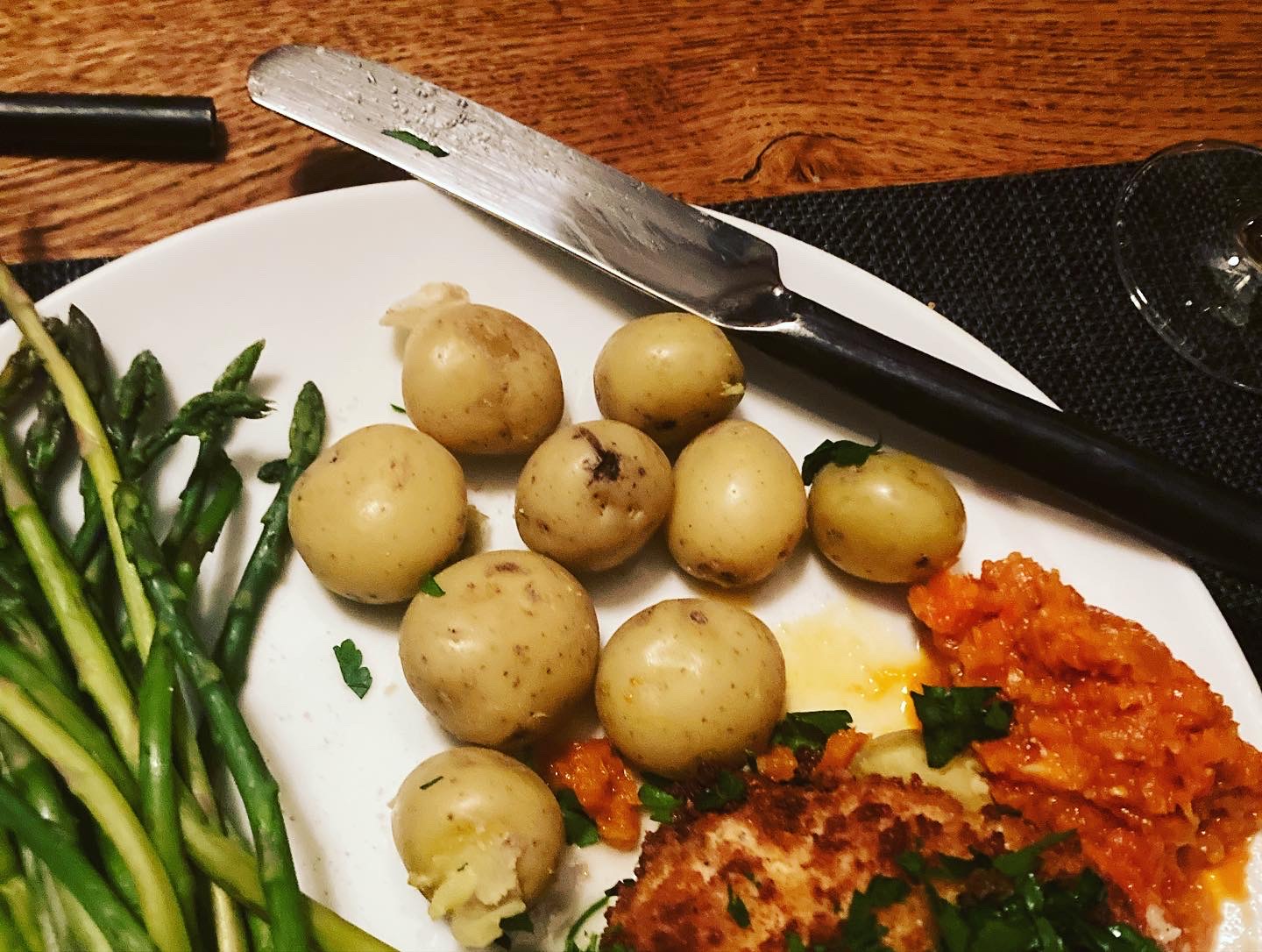 We were having some neighbors we hadn't seen in far too long over for dinner yesterday and I had a whole meal planned. I'd been wanting to make a rosewater cake so I was building a Middle Eastern menu around that. But when I woke up and read the news, and saw the footage coming out of Ukraine, I was filled with an overwhelming desire to cook Ukrainian food.

What do I know about Ukraine? Besides the brouhaha about Donald Trump's infamous phone call to and press conference with newly elected President Zelenskyy, and my friend Bernadette's incredible dyed Ukrainian eggs, not much.

My favorite way to find authentic regional recipes is to google, for example, "authentic Ukrainian recipes." You always stumble on some heartfelt website like this one filled with family dishes. Often compiled by people far from their homeland, the nostalgia and longing fairly ooze off the screen. Food, like music, is direct line to our history and our hearts.

Building a menu begins with a toehold. I needed something that didn't have to be marinated overnight. What is Chicken Kiev, anyway? I've seen it on a million menus but I don't think I've ever actually ordered it. Is there cheese? No, that's Chicken Cordon Bleu. You probably know this, but I didn't: Chicken Kiev is chicken breasts pounded and then folded around frozen garlic herb butter, then breaded, fried briefly and baked. If you do it right, the flavorful butter stays sealed inside until you cut it, then it flows in a steamy savory river onto the plate, to dip your crunchy chicken into. OMG.

Okay, so no need for any fancy side dishes. Boiled potatoes and steamed asparagus seem appropriately Eastern European and will be perfect for dipping in all that butter. My impression of Eastern European cuisine is goulashes and pierogi and borscht -- hearty peasant food with a lot of root vegetables. This impression was reinforced when I was in New York last fall and followed the ghosts of Lou Reed and Joey Ramone on a pilgrimage to Veselka. It was sooooo good. Definitely the food you'd need to go out and hitch up the draft horses in a frosty Ukrainian field. 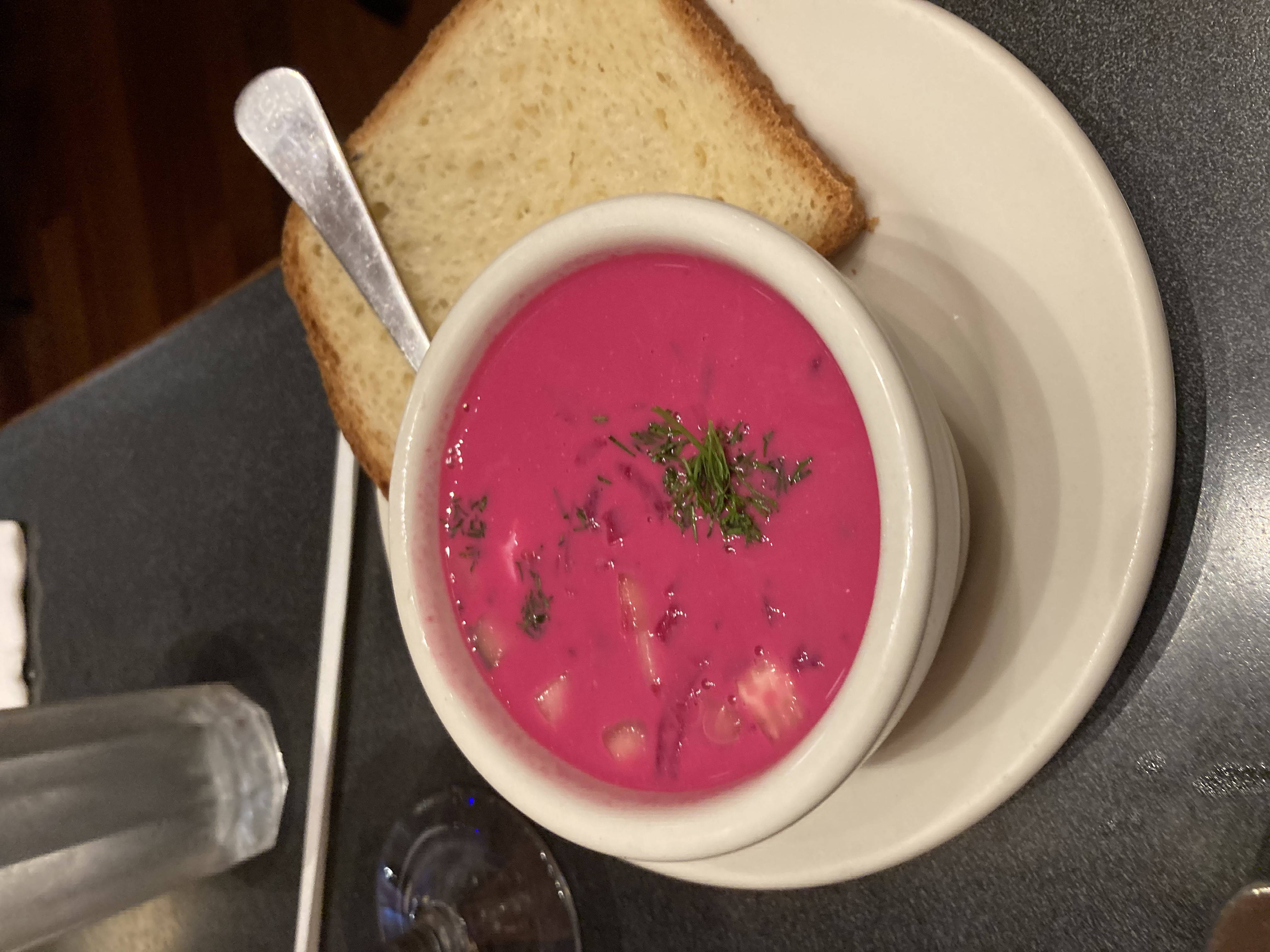 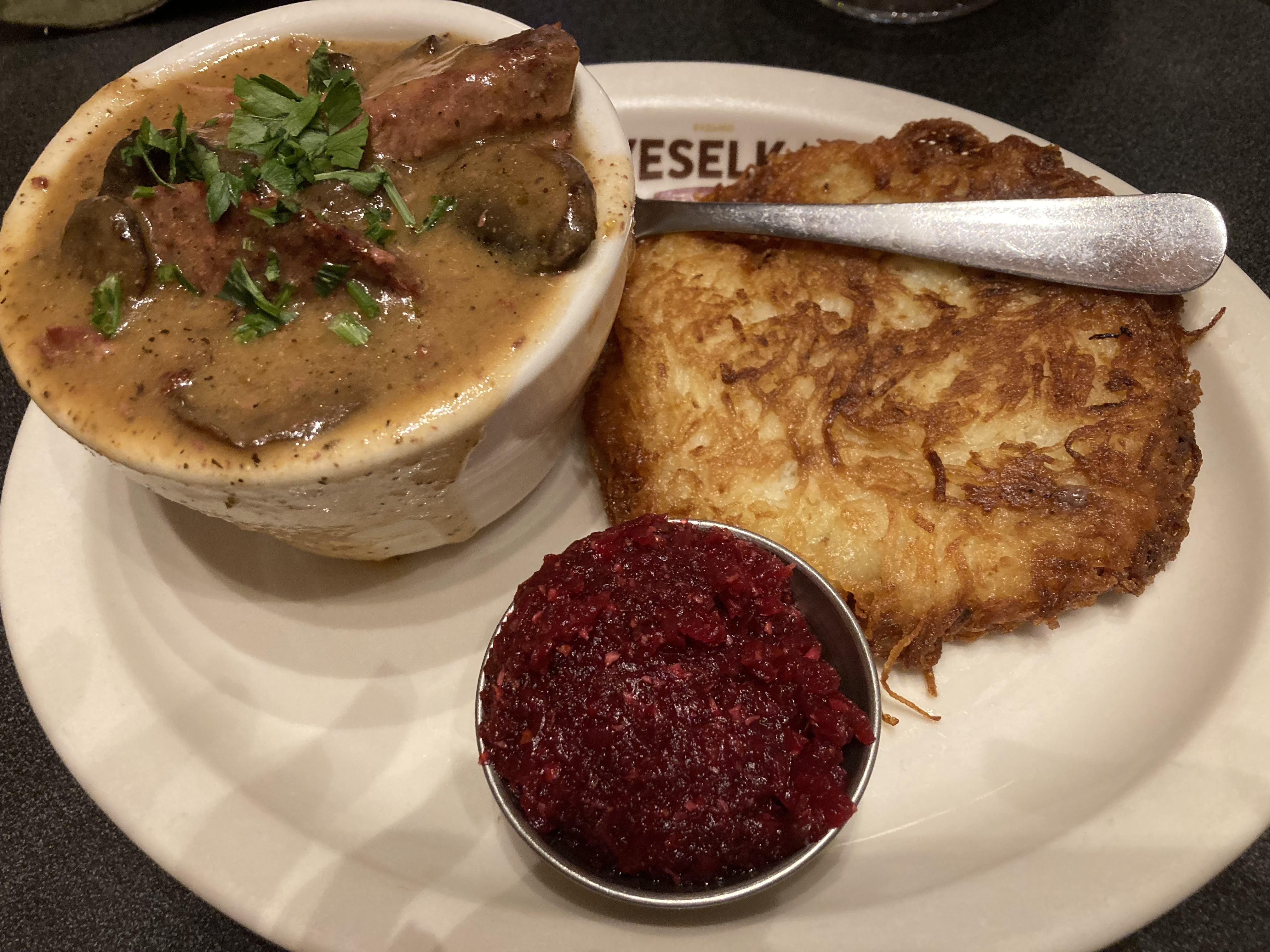 But my hubby always wants something spicy for dinner. Is Ukrainian food ever spicy? It turns out: yes. There's a sweet and savory condiment called Adjika, which literally means "spicy sauce." For someone who just finally got the gist of saying "Ukraine" instead of "The Ukraine," there's a lot -- which is to say everything -- I don't know about the country or its food. For starters: it's "Kyiv," not "Kiev." Sort of like how there's no "cow" in Moscow. And also: Ukraine is not Doctor Zhivago-style frozen fields. It's got a temperate climate.

To take a crash course in Ukrainian food is to learn about a place whose rich soil has long made it one of the world's biggest producers of grains (wheat, barley, corn) and the seeds and oil of sunflowers (the national flower), not to mention its geopolitical desirability as a buffer between Russia and Western Europe and as the gateway to the Black Sea. You see the culinary influences of a region that has ping-ponged between empires for hundreds of years, only declaring a rocky independence in 1990. Russia's invasion this week only reinforces the fragility of Ukraine's existence as a sovereign state, captured in its young leader's defiant and stirring declaration night before last of the self-determination of proud, tough people. 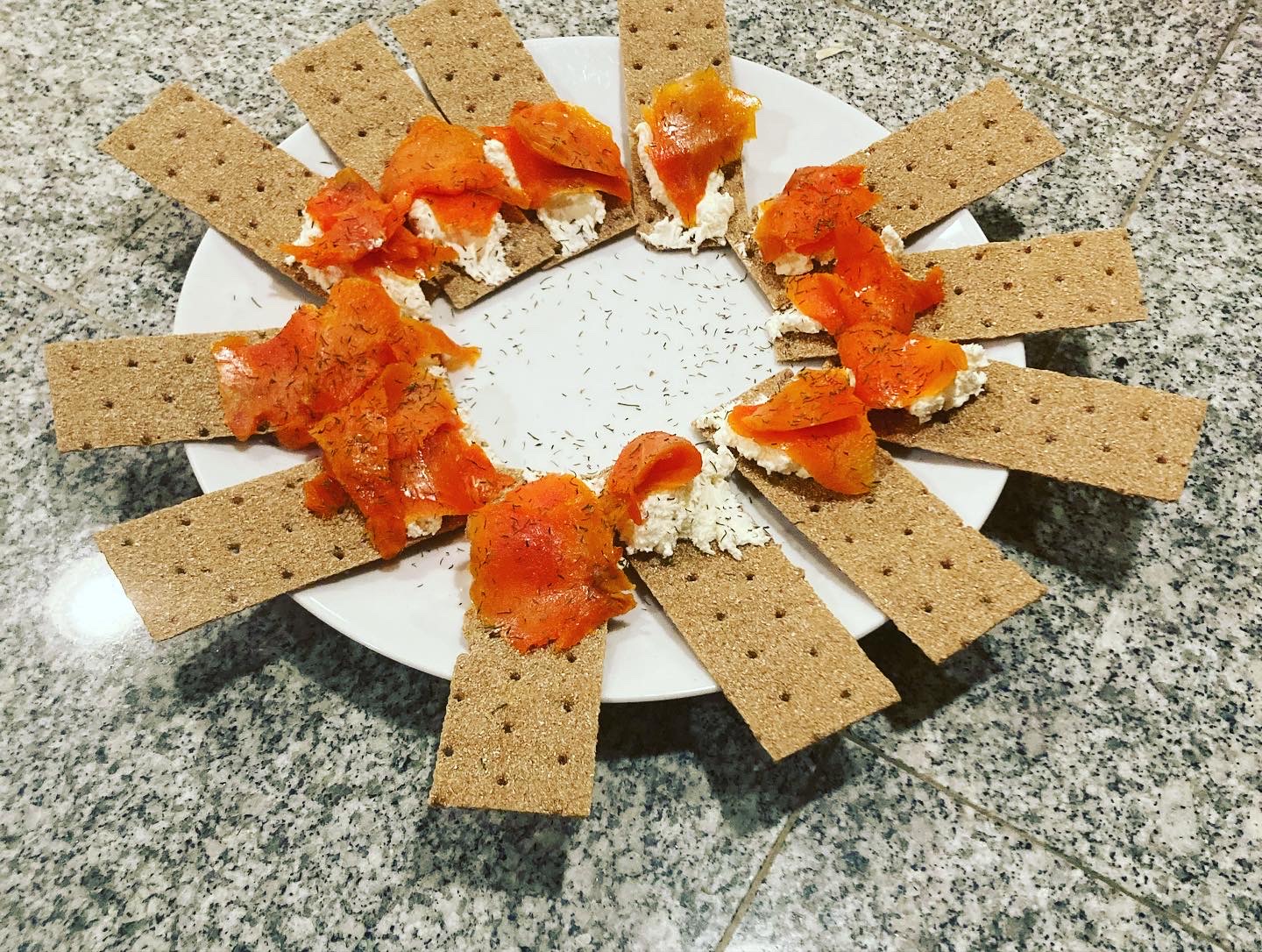 We started with Vodka gimlets with Rye crackers with cream cheese, smoked salmon and dill. Then the Chicken Kyiv with boiled new potatoes and steamed young asparagus, with Adjika on the side. The butter didn't stay entirely inside the chicken, but I'll improve it next time. It was still freaking delicious.

And for dessert: a Ukrainian Apple Cake topped with vanilla whipped cream. 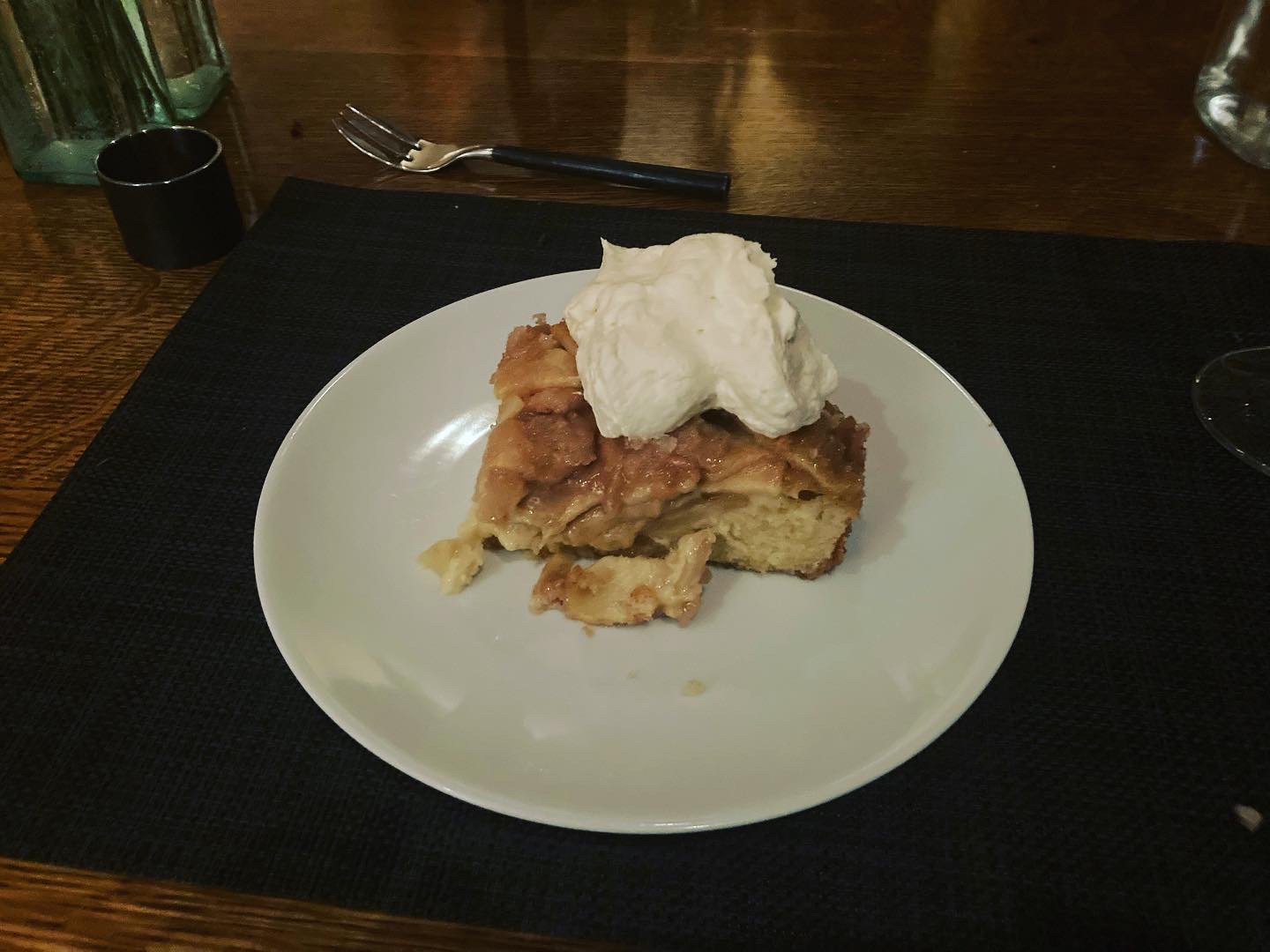 Here are two recipes, which are very easy and delicious.

Puree the vegetables and apples in a food processor. Put in a big pot and cook on medium for an hour, stirring occasionally. Stir in the oil, vinegar, salt and sugar and cook for another 20 minutes. Turn off the heat and stir in the garlic. Let it sit at room temperature for an hour before serving. This recipe makes a lot, but once you try this, you'll want to put it on everything, so you could can it or keep it in the fridge for up to two weeks.

Yabluchnyk (Ukrainian Apple Cake) (or pear, or cherry, or plum...)