Joy! As Experienced at a Music Conference 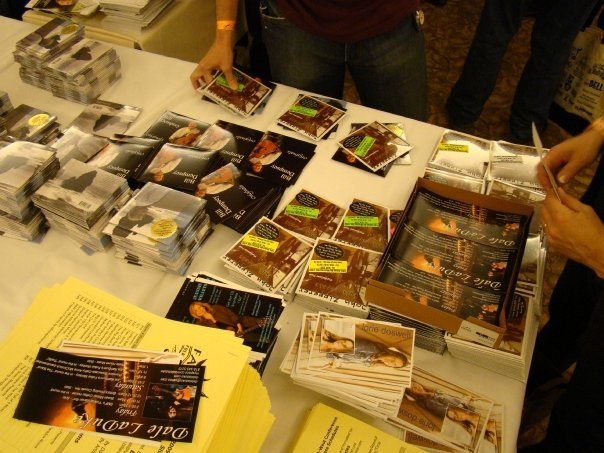 I wrote this in 2009, after I got home from the FAR-West Music Conference. Facebook just reminded me of it. Thought I'd share.

It's a physical thing: kind of down my throat and around my chest. It's a profoundly satisfied, joyous, relaxed-yet-energized feeling. There's humor to it. I feel funnier than usual and pretty and worthy and kind of badass. It happens most often in rehearsal, or, as it did this weekend, at a late night jam. It happens the whole week when I'm recording in Austin with Mark. It involves connecting with other musician(s) in a comfortable, inspired way. I go out on a limb.

When I'm performing, I'm usually too alert (remembering what I'm supposed to be doing, worrying that everyone knows their part, trying to connect with the audience, reacting to the expressions on people's faces, etc.) that I rarely settle in enough to feel it. Once in a while - especially doing my play - I was rehearsed enough that Danny, the audience and I could lock in and become one organism - connected, communicating, feeding off each other. But most of the rest of the time the pickup band and I are just pulling things together in time for the show.

The moment that I think of most recently - and it just makes me smile - is a jam session last Saturday night/Sunday morning at about 4:00 am. I was sitting on a chair in a suite at the Irvine Hyatt, leaning back, eyes closed half the time, listening and occasionally chiming in with a harmony. I had completed all my showcases and had done them right (promotionally, performance-wise, rehearsal-wise, guitar-player-choice-wise). About 15 people were there jamming: someone would play a song and others would fall in and we'd all sing some kind of harmony.

I was tired. But I didn't want to leave. Tom Corbett, who accompanied me in a couple of my showcases, was sitting on the couch with his mandolin, and every time someone would start a song, he'd start playing the most beautiful inspired part with a big smile on his face. At one point someone made a joke about Kiss and he put the mandolin behind his head and played the rest of the song that way. And then an older guy sitting by me started playing Johnny Cash's "Tennessee Flat Top Box," and he didn't know all the words, so I jumped in to help him out and he grinned and said, "you take it," so I did and it was even in my key.

As it got later and later, or earlier and earlier the next day, Tom said, a couple of times, "This is getting silly," but someone would start a song and he would be unable not to play along. Finally at 6:00 am someone opened up a bunch of beers (and I knew that was going to be a bad idea), so a few of us spontaneously got up to go to bed. I took the elevator, leaning on the wall, and when I got to my floor I said goodnight to the guys and staggered out to my room, where my beloved roomie Julie Christensen was sleeping. It felt SO GOOD to climb into my bed in my dress, put the pillow over my head, and collapse into a sleep I knew was going to be far too short.

And that night, I got home and my sweet husband and two daughters and a couple of close friends were waiting for me with a wonderful dinner, because my birthday was the next day.

For all the times I feel like I'm banging my head against the wall, it's good to have moments like this to remind me what I'm doing this for.