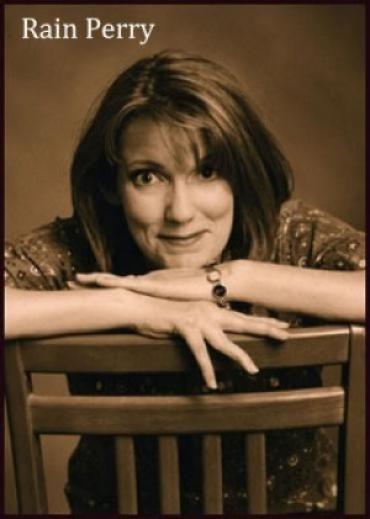 God help me but I cannot pass up a chance for the good headline and the fact that Rain Perry's latest album is titled Men makes it irresistible. Even though this is not necessarily about the album makes little difference for it plays a small part, though very small, in this view of Perry, who has recently returned from a side journey to find her studio razed by the Northern California firestorms which devastated that area.

The amount of work lost alone makes it a personal tragedy, but the thought of raging flames and what must have seemed a hurricane of winds has to be soul-draining. Her posts on social media have shown her resilient if nothing else, though, and she is going through her stages of grief and coming out the other side with a new look at life, writing that perhaps this is a new beginning. It is. If it wasn't she would be throwing in the towel.

No towels here that I can see and Perry moves on, probably to heights unimagined previously. She has a vision. She has probably always had a vision. “Ten thousand tons of ice are crushing you into a beautiful one-of-a-kind/The fall will come and you will be... Yosemite.”

I wish I had heard her music before writing my review of her documentary film, The Shopkeeper. I would have better understood why she not only undertook the telling of the story of Austin's Mark Hallman and Congress House Studio for I could tell the reverence she held for both by the obvious effort put into the film and her efforts to get people to see it. She had recorded three albums there under the watchful eyes of Hallman and others--- three exceptional albums I had not heard until today, Christmas Eve of 2017. She shared files of those albums with me a good year ago and I ignored them, but not intentionally. I wanted to listen--- I did--- but time gets away, you know? But I am listening now and realizing that I have cheated myself, not of the music but of time. I could have heard “Yosemite”, a monument of a song about a national monument, long ago. I could have experienced the wonder of nature through Perry's eyes and mind. Furthermore, I could have experienced the pain and joy of life through “Cinderblock Bookshelves” (the song) or the irony (if that is the correct word) of life as presented in “Dear Dad”, a song thanking another girl who had co-opted a boyfriend which whom Perry may have been enamored only to find later that her true love waited in the wings.

It is no wonder The Shopkeeper is important to her. She went into the project knowing little and came out three albums later with somewhat of a legacy. I can hear it as the music plays. I want to write long chapters about each song, knowing how much she loves what was produced there--- what she “learned” there.

I am sure each time Perry entered Congress House she was prepared, and maybe even over-prepared. But good people (people who know their shit, as a friend once put it) have a way of knowing and they know what to do. When they don't, recording can be a disaster and Cinderblock Bookshelves, Internal Combustion, and Men are hardly that. Sure, you can credit Perry for the songs and the vision, but getting them down on tape is mostly a group effort, I have found, and between the lines she lets us know that here, that was the case.

Three years separate Bookshelves from Combustion and while Perry's voice does not change, she becomes less introverted. The topics stretch a bit further, including the life which surrounds her. She has changed, the people and topics have changed (at least, her view of them), and Modern Pop has infected what earlier was more of a cry of the lone wolf. She is there still but now singing more from the viewpoint of a musician than a young idealist discovering a new world. She throws in flashbacks to the earlier recordings such as “Red Green White Blue” and “Ambulance Song” which derails me for the length of the song and sometimes beyond. I think, Momma our little girl is growing up, and while it tears me up it is also joyful in some mental or metaphysical way.

Men. Another step away from introspection but how could it not be? Perry is learning her trade. A bit more rock and Power Pop, the songs are an example of everything coming together in the studio. I may be overstating the impact of Congress House and its denizens but electric has pretty much replaced the acoustic and the result is stunning. The personal has given way to stories outside The Realm, as it was.

As on “Unami”. Perry takes a slogging stroll through the spectrum of... uh, taste. She somehow has found a way to make something like the sensation of actual taste a musical topic of import. Or using negative colors on “Photonegative of Love”. Or talking a story about Atlas, who gave up carrying the world to become a man, even knowing that would end his immortality.

Perry laughingly refers to The Shopkeeper as her “fourth album” and for good reason. With the recording world imploding due to a number of factors, digital streaming being the most noted, she faced the implausibility of a new album gaining traction. So she turned to film and a subject which was as important to her as was her own music. Her latest album, it turned out, was not to be an album of music. It became a tribute to the people and the place which had made her what she had become as a musician for without Hallman and the studio, her direction would have been different. The film is a tribute to people committed to the art of recording and tells a story way beyond the story itself.

Rain Perry and I share so much. She is as fanatic about music as myself, takes personally the impact of business on the art, and cares about the people more than she should (though I and, I am sure she, would argue that last point). She has in her discography an earlier album (Balance) and a single released in 2000 (Cinderblock was released in 2008) I have yet to hear, but I am thinking it might be very worthwhile to dig into the archives, so to speak.

Right now, though, I am imagining the ashes which were once Rain Perry's life. It is not just the loss of physical things here. It is the loss of roads built and maybe needing to be reconstructed but maybe not. It is about prioritizing a life interrupted.

But Rain Perry is a lemonade maker. Life has handed her lemons and she is determined to make the best damn lemonade anyone has ever tasted. And as long as she remains positive, I am 100% certain that music will be a huge part of that lemonade. Films, too. It is just who she is.

From Rain Perry, her own self: “My studio: luckily, it's not the place I record my records – that would be the Congress House in Austin! But it was where I kept all my stuff for my career etc. There are things I'm really sad about losing and some recordings that I can't believe are gone. But I do feel some freedom of being forced to let go of ideas that I was probably never going to bring to fruition and just start fresh.”